The Totem Pole in the Landmark  Car Park is just a taste of things to come. 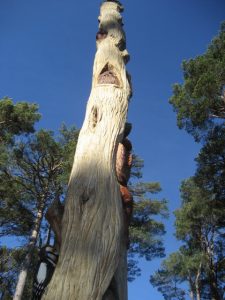 Carved by Black Isle Carver Ian Chalmers of Chainsaw Creations  it sets the scene for more inside the park itself.

The carvings in WonderWood by are by Black Isle based Carver and regular at Carve Carbridge Iain Chalmers.